Truth wears no mask, seeks neither place nor applause, bows to no human shrine; she only asks a hearing.
-Anita Jacobs Thompson
Posted by Caddie at 5:02:00 AM No comments:


“America Is A Bomb Waiting To Explode” 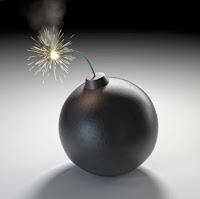 The Ills of Mankind - George was so Right!

"The paradox of our time in history is that we have taller buildings but shorter tempers, wider freeways, but narrower viewpoints.

We spend more, but have less, we buy more, but enjoy less.

We have bigger houses and smaller families, more conveniences, but less time.

We drink too much, smoke too much, spend too recklessly, laugh too little, drive too fast, get too angry, stay up too late, get up too tired, read too little, watch TV too much, and pray too seldom.

We have multiplied our possessions, but reduced our values. We talk too much, love too seldom, and hate too often.

We’ve learned how to make a living, but not a life. We’ve added years to life, not life to years.

We’ve been all the way to the moon and back, but have trouble crossing the street to meet a new neighbor.

We conquered outer space but not inner space. We’ve done larger things, but not better things.

We’ve cleaned up the air, but polluted the soul.

We’ve conquered the atom, but not our prejudice.

We write more, but learn less.

We plan more, but accomplish less. We’ve learned to rush, but not to wait.

We build more computers to hold more information, to produce more copies than ever, but we communicate less and less.

These are the times of fast foods and slow digestion, big men and small character, steep profits and shallow relationships.

These are the days of two incomes but more divorce, fancier houses, but broken homes.

These are days of quick trips, disposable diapers, throwaway morality, one night stands, overweight bodies, and pills that do everything from cheer, to quiet, to kill.

It is a time when there is much in the showroom window and nothing in the stockroom. A time when technology can bring this letter to you, and a time when you can choose either to share this insight, or to just hit delete.

Remember to spend some time with your loved ones, because they are not going to be around forever.

Remember, say a kind word to someone who looks up to you in awe, because that little person soon will grow up and leave your side.

Remember, to give a warm hug to the one next to you, because that is the only treasure you can give with your heart and it doesn’t cost a cent.

Remember, to say, ‘I love you’ to your partner and your loved ones, but most of all mean it. A kiss and an embrace will mend hurt when it comes from deep inside of you.

Remember to hold hands and cherish the moment for someday that person will not be there again.

And always remember, life is not measured by the number of breaths we take, but by those moments that take our breath away."
~ George Carlin ~
Posted by Caddie at 4:53:00 AM No comments:

Ghandi's -‘My Life is My Message’.

I can only hope mine to be the same, that it be a good message, that there will be good direction from it.
Posted by Caddie at 12:19:00 PM No comments:

God and St. Francis - I Laughed Out Loud

A Conversation between God & St. Francis on nature & human nature
As i watch the suburbanites daily i cannot help but think of this little story about god and st. francis having a conversation on nature and the ridiculous nature of humans. it's an old one that's been passed around plenty but worth another read because of it's truthfulness.

God: Hey St. Francis, you know all about gardens and nature. What in the world is going on down there in the Midwest? What happened to the dandelions, violets, thistle and stuff I started eons ago? I had a perfect "no maintenance" garden plan. Those plants grow in any type of soil, withstand drought and multiply with abandon. The nectar from the long lasting blossoms attracts butterflies, honey bees and flocks of songbirds. I expected to see a vast garden of colors by now. But all I see are these green rectangles.

St. Francis: It's the tribes that settled there, Lord. The Suburbanites. They started calling your flowers "weeds" and went to great lengths to kill them and replace them with grass.

God: Grass? But it's so boring. It's not colorful. It doesn't attract butterflies, birds and bees, only grubs and sod worms. It's temperamental with temperatures. Do these Suburbanites really want all that grass growing there?

St. Francis: Apparently so, Lord. They go to great pains to grow it and keep it green. The begin each spring by fertilizing grass and poisoning any other plant that crops up in the lawn.

St. Francis: Apparently not, Lord. As soon as it grows a little, they cut it... sometimes twice a week.

God: They cut it? Do they then bail it like hay?

St. Francis: Not exactly, Lord. Most of them rake it up and put it in bags.

St. Francis: No Sir. Just the opposite. They pay to throw it away.

God: Now let me get this straight. They fertilize grass so when it does grow, they cut it off and pay to throw it away?

Life in General and A Helping Angel Named Rick*

The past few months have been quite hectic and seemed to have sped along like a speeding train.  I find it almost impossible for it to be October already; in fact, a third of it gone already.   Doesn't seem but a few weeks ago that I was starting seeds for the wonderful, thriving vegetables I would have come summer.  My high hopes were dashed, for spring and summer came and zipped by entirely too fast.  Nothing thrived!  So to speak, for the big tomatoes turned out to be the small salad type, every last one of them  Today I have loads of "tommy toes" on vines in the mulch pile.  100s!  Yet they aren''t ripening.  the few handfuls I did get I enjoyed and was very grateful for having them.  Most  split , bugs, slugs get to them before I can.  No blackberries this year, nary a one.  Maybe 10 strawberries.  Not one squash.  Ha, Ha, yeah, THRIVE. This land was a sight to see with the great lot of blooms - then kerflunk, they would shrivel and dry.  SO, I have retired as gardener for life.  Such disappointment; I never.
Most of my time was spent on the mower. Still at it.  I have reached a point in life when I realize I cannot go on with  this way of life much longer.  So many health issues rearing their heads also.  Forgetfulness is at critical stage. I stagger and stumble so you'd think I'm drunk.  I imagine I should see a doctor, yet I have no inclination to take their drugs or placebos;  a Reclast infusion in August for my bones  is 'guaranteed' to build them back - THEY say.  So why do I have so much all-over pain?  Growing bone pains? I guess.

My grandson has kept the grass edges trimmed but stopped now for he has pleurisy.  Hospitalized this week.  The windows still are waiting and I dare not climb a ladder while alone...that 'dizzy drunken' state again.  Back in August, while mowing, I went completely blind in the left eye for several minutes. The upper half of vision soon returned while the lower half took longer.  Weirdest experience ever!  Dr. J, my eye surgeon, thinks my carotid is blocked, that some plaque broke loose and caused this blindness.  So time for an ultrasound from the vascular surgeon next month.  Sure hope a piece doesn't break lose and go to my brain before then.  Just what I need: a blind brain!

I have been aggravated greatly for many months with the computer.  It was a new and different problem every time I turned it on.  On the verge of saying "to hell with it all" and canceling Internet service so many times (CenturyLink just keeps going up, up and up in cost), yet hesitating time and again, I finally called on Rick at www.Rick'sbitsandbites.com He used www.TeamViewer.com, remotely connected to my computer and fixed so many problems.  He even was able to talk to me via Notebook.  I sat here three or four hours watching, while that amazing man took over my cursor and did his magic.  Watching that cursor zip all about (Rick is FAST) was a fascinating education in itself.   I had more than 300 infections, I think he told me!   I am so grateful for Rick freely taking on this huge situation and fixing it. * Bless your heart, Rick, I thank you greatly.  Oh, to be able to understand all the complicated fixes myself!  Not to be, unless I go take some computer courses.  With the condition of my memory, I don't think this would work very well; besides, there is no money or physical energy left in me to take on such an endeavor.  Also, I forgot momentarily that I'm 90% deaf!  I am good at reading lips though.

What a chilly wet day it has been.  I don't relish the days gradually getting colder.  I read on AccuWeather that the Southeast will see some hard winter time.  Best to be forewarned; can't put off preps for much longer.  Sure hope the furnace makes it another season and that the electricity doesn't falter.  I won't ever forget the nightmare I barely lived through a short few years ago.  I need an alternate heat source, for certain.

I'm outta here.  It is past bedtime once again.

You take care and I will return again sometime.  I have a "million" plans in mind for when I'll be cooped up inside soon.

* He admitted it was a Doozy.


"He who is in too great a hurry, can bring nothing to perfection,

but is almost sure to spoil that which he has in hand."