Paddy tells Mick he is thinking of buying a Labrador.

Mick says, "Are you mad? Have you seen how many of their


A true story from Mount Isa in Queensland.
Recently a Police patrol car parked outside a local pub. Late in the evening the officer
noticed a man leaving the bar so intoxicated that he could barely walk.

The man stumbled around the car park for a few minutes, with the officer quietly observing.  After what seemed an eternity and trying his keys in 5 vehicles. The man managed to find his car, which he fell into. He was there for a few minutes as a number of other patrons left the bar and drove off.

Finally, he started the car, switched the wipers on and off (it was a fine dry night.) Then flicked the indicators on, then off, tooted the horn and then switched on the lights.

He moved the vehicle forward a few metres, reversed a little and then remained stationary for a few more minutes as some more vehicles left. At last he pulled out of the car park and started to drive slowly down the road.

The Police officer, having waited all this time, now started up the patrol car, put on the flashing lights, promptly pulled the man over and carried out a random breathalyzer test.  To his amazement, the breathalyzer indicated no evidence of the man's intoxication.  The police officer said, "I'll have to ask you to accompany me to the Police station - this breathalyzer equipment must be broken..."

This morning I put a post at "Its a Big Universe". The link is over in the sidebar. There are two short recordings. The speaker tells of a huge deadly bubble lying below the Gulf oil spill site, a bubble of gas. He speaks of the "mudlog" data that is meticulously charted when drilling is occurring.
The two recordings are less than 20 minutes total, containing information that is critical for us to know and that is known only to BP.
If you don't want to read the other post, then go straight to the recordings here:
http://www.brasschecktv.com/page/872.html


Give me some feedback about this. Anything that goes on in this world sooner or later will ripple out to the whole planet, ultimately to each of us, you and I.
Posted by Caddie at 8:53:00 AM No comments:

Americans were traveling by tour bus through Holland.

As they stopped at a cheese farm, a young guide led them through the process of cheese making, explaining that goat's milk was used to make their special brand of cheese..

Later, she led the group to a segment of the farm to a lovely rolling gbreen hillside where many goats were grazing. " These ", she explained, "are the older goats--put out to pasture--when they no longer produce "

She then asked: " what do you do in America with your old goats? "

A spry fast-thinking old gentleman in the back answered: "They send us on bus tours!"
Posted by Caddie at 12:54:00 PM No comments:

You think the Gulf of Mexico oil disaster
is horrifying?
Shell Oil leaks that much in the Nigerian
delta - EVERY year.
And there's more.
Elsewhere on earth - in a place you'd never
expect - a forest the size of England is
being turned into a permanent wasteland...
for oil.
Video:
http://www.brassche cktv.com/ page/863. html
A 12 minute video about the oil business marching on in Alberta, Canada.
here an article regarding the situation in Nigeria.
http://www.globalissues.org/article/86/nigeria-and-oil
There is a symbiotic relationship between the military dictatorship and the multinational companies who grease the palms of those who rule....
Quoted “They are assassins in foreign lands. They drill and they kill in Nigeria.”
This news item arrived in the mailbox yesterday. Here in part:
SALT LAKE CITY (AP) — A leaked pipeline sent oil spilling into a Salt Lake City creek, coating geese and ducks and closing a park, officials said Saturday as they started a cleanup effort expected to last weeks.
At least 400 to 500 barrels of oil spewed into Red Butte Creek before crews capped the leak site. Nearly 50 gallons of crude oil per minute initially had spilled into the creek, according to Scott Freitag, a Salt Lake City Fire Department spokesman.
"Our real concern is keeping people safe, and keeping the oil from reaching the Great Salt Lake," he told the Deseret News.
Chevron determined the pipeline broke at 10 p.m. Friday, and police and fire crews were notified of it shortly before 7 am. Saturday.
Officials were unsure of the cause of the leak, near the University of Utah campus, or the extent of the spill's environmental impact.
The state Division of Water Quality …assessing damage … will issue a violation notice against Chevron, Gov. Gary Herbert said in a release. The governor said he was monitoring the spill, which he called "devastating."
Chevron spokesman Mark Sullivan said… the cleanup likely will take "weeks."….
….Crews were using absorbent booms and creating dams to contain the spill, but officials said some oil had flowed as far as four miles to the Jordan River, and into a pond in the city's Liberty Park, near where residents reported dead fish in their ponds.…..
About 150 birds have been identified for rehabilitation….  About 75 percent are Canada geese.
"A lot of them are just coated from about the water line, but there are a number of birds that started preening and have oil completely covering their bodies," said Tom Aldridge, migratory bird coordinator for the Utah Division of Wildlife.
No doubt, its all about OIL. We live with the mythological Hydra.
Posted by Caddie at 9:01:00 AM No comments: 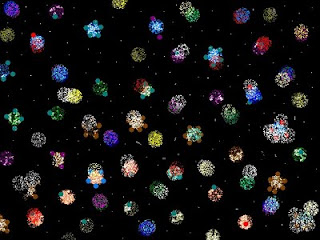