A Laughing Matter - Via a 3 year Old

Copied w/permission.  Any time I have a laugh, I want to share.  This one should do the trick for you! Ha, Ha, Ha.

As I was trying to pack for vacation, my 3-year-old daughter was having a wonderful time playing on the bed. At one point, she said, "Mommy, look at this," and stuck out two of her fingers.  Trying to keep her entertained, I reached out and stuck her fingers in my mouth and said, "Mommy gonna eat your fingers!" pretending to eat them before I rushed out of the room again.  When I returned, my daughter was standing on the bed staring at her fingers with a devastated look on her face. I said, "What's wrong honey?"  "Mommy, where's my booger?"
Posted by Caddie at 10:16:00 AM 1 comment:

Sitting here tonight in a sharp chill and dead silence except for that ocean sound in my ears (vertigo) I am fervently wishing to be way down south and run to my Sandy for a hug and big bowl of her delicious food.  What a great cook she is ...or was.  Her cooking days are all past now.

You know what the passage of time does for all of us.  If you don't know yet, you are one day in for a rude awakening!

She tells me now her days in the kitchen are over.  She went elsewhere for the first time this Thanksgiving, whereas it used to be you could walk through her door and the wonderful aromas would greet you smack in the nostrils.  Simple food but scrumptious.  I would always leave her table full as little waddling happy puppy.

One dish she used to make was her "Simple Seasonal Pasta Salad".  She wasn't like me for she always followed the book when cooking.  Me?  I could cook well too but I would deviate from a recipe until the taste suited me.  As I became old and worn out, so often from the day's work outside on my 'farm' it was often a one-pot concoction - a goulash.

I'll never forget one time my very small grandson, around age three, three and a half, was visiting me.  Everyone was sitting around the table, waiting in anticipation as I set the big bowl of goulash down beside the platter of steaming cornbread.  A slight frown showed on his face.  I spooned a helping on his plate; he hesitated until I said "Eat up, Michael".  He very timidly spooned a bite, then another, then another.  Then he spoke up and said: "Ganny Callin, this stuff looks awful  ...but you sure are a good cook".  We all burst out laughing  ...the best compliment I could have ever received, I'm telling you!

I cherish words out of the mouths of babes. They can be so opened-eyed honest.  Today Michael is grown, soon to become thirty-three years old.  Lord, how I miss seeing him; he was so precious when such an innocent child. Life goes on though and everyone travels their own road of destiny.

Sandra called Thanksgiving evening as she does quite often, every holiday and a few times a month.  She has been very faithful to do so since we lost my brother almost six years ago, the worst nightmare; a never ending heartbreak for the both of us and always in the mind.  She can't speak of her loss. We talked of the noon meal we'd each enjoyed, her news of her only grandchild being engaged,  to be married in two years after she finishes college, we both catching up since our last phone visit.

Cook macaroni according to directions, drain.  rinse with cold water to cool quickly; drain well.  In large bowl, stir together cooled pasta and remaining ingredients.  Cover and refrigerate at least for one hour.  (Any leftovers are even more tasty the next day)

Makes 10 servings, 210 calories (if made with fat-free dressing)

What Judge Jeanine Pirro Has to Say About It

If you've never heard of Judge Pirro, you have been missing out; missing out on some very straight talk on current issues.  She is good.  Smart as a whip, well educated speaker and judge.

The first time I ever heard of this woman speak was on a YouTube video, which by accident I came across her name sometime before the election in November 2016.  I was so very impressed with her intelligence.  Listening to her short talk,  I thought to myself: This woman knows her stuff.  She would make a good president.  Maybe one day she will become so.  Today she is getting out to people with her position with Fox news media.  I think she is brilliant! Check her out for yourself. A short talk


I stole this from somewhere.  I do  remember I enjoyed reading the information. A unique bunch.
Posted by Caddie at 5:47:00 PM No comments:

A man is wealthy in proportion to the things he can do without
Posted by Caddie at 5:40:00 PM 1 comment:

Oh, Did I Have An Encounter

Dishonesty is a no-no for both men and women. One study proved that people become less attracted to those who lie to them, regardless of the gender. So, in case you've amplified your Tinder profile page, you may want to tone it down a touch and bring it closer to your real life in case you actually find the love of your life there.

Just another broken, sad day.  Today is my middle child's birthday, the 55th. I post this only as a personal remembrance of shattered relationships.  Yet,  reminders aren't really necessary, are they, when pain continuously lays within the heart and every cell of the body.  Without doubt, life sure is a hard trial.  Especially when you are cast off like a long lingered illness.

Mankind, So Fickle and Uninformed

And growing worse, minute by minute!
The two "memes" below should prove it.

This man did have honor and integrity - 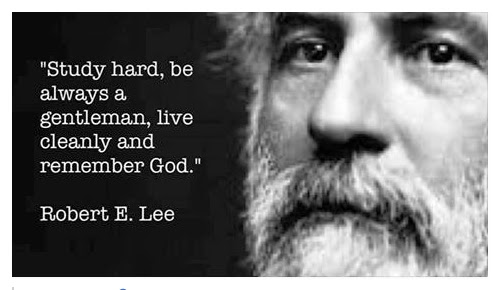 not as some look on him today.  Uninformed, are you?  Study, Lee said.
Be a gentleman

And here you have

Pertinent Information For Us All

WiFi Ain't Your Friend - An Interesting Experiment (a link)

I personally use salt lamps to block some of the EMs.  (find at health stores)  Not only our computers bombarding us with EMs but most everything we have contact with now.  My Smart Meter is within 8 feet of my old damaged frame/body. Smart Meters 100% worldwide shortly. How about your smart phones wagging on your hip?  Killing us silently!  More so than I realized.
Posted by Caddie at 12:59:00 PM 1 comment: