In Bed With the Opposition *

Having just finished a book about Alaska in the early 70s, "Going to Extremes" by Joe McGinniss, the story of his travels in the land of Alaska, a land that reaches into the Arctic Circle and beyond - pure - unadulterated,wilderness country; the tale of his long hike with several others with Ray Bane, a geographical researcher, mapping the primitive, wild reaches of the unimaginable, eye-boggling vastness of the Brooks Range Mts.  and surrounding areas, -70F cold, miles high and tenting, their up-close encounters with several grizzles, I then turned to the Internet for more information about our last acquired state of the United States.  Joe's story certainly enthralled me to the last page.

You ought to read it! It's so good.

Having a long ago interest of heading off to Alaska about the time of the pipeline construction in Prudhoe Bay, this book put new life - interest, enthusiasm into my mind.  Of course, any sensible person knows that the desire to go there is a wasted dream now, even to a fool in my age category but I digress.... I'll get back to the Internet subject.

You know how it is; we tend to surf and jump about, often winding up somewhere totally unrelated to our initial  search. That's what I did.  In my clicks,  I came upon the following article regarding the man convicted of shooting Ronald Reagan, John Hinckley, Jr.

Now I understand many do not spend time reading "that nonsense" (I rarely) of those "Conspiracy Theorists", considered to be the rantings of some 'Nutjob' and having absolutely nothing to do with our daily, personal lives (not always the case, my friend.  Often not the case).

We tend to forget much of what we hear via the big, brainwashing, mainstream news media's - "Why ever not?" - bombardment, day after day of our world's turmoils, can soon become too  burdensome for our minds, and dealing with our daily life.  Thus we push away from the onslaught of it all and need a rest and wanting to take a deep breath of fresh air.  Nevertheless, the bs continues even if we aren't aware of it all.

This article below only emphasized the fact that too often we do not have a clue of what is really going on in the outer reaches of our world, especially of the political scene.

I bet you a nickel this information never showed up on any of the main news channels!  It is a long read but worth your effort, for right now/today there is another one of the  BS hitters, namely a member of the Bush family, the former Florida govenor, is "tentatively" plotting to join the race in our near future to take control of what we can only wish to be our freedom; he and his political cohorts undoubtedly dismissing the 'nonsense' that comes from those silly conspiracy theorists 'out there'.

The grand majority of politicians have a few goals that I believe never enter into thought for the welfare of society nor their obligation for such. Those goals are: control, bulging pockets and ease in their retirement!

Read and judge for yourself.  This is an old news piece but it still has value and knowing the subterfuge that continues day in and day out in the works of the elite to keep control of us, often unsuspecting, ignorant (unversed in...) citizens, it is  well and good to have recall of our past history.  Go to the link below for the entire article.

This man not only tried to assassinate Ronald  Reagan but shot and crippled James Brady, who died this past year, released from his many years in a wheelchair.

Partake - A Clue to Knowing * 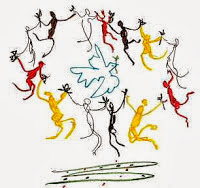 - Rumi, “The Book of Mirdad”
compliments of Coyote Prime
Posted by Caddie at 9:45:00 AM No comments:

Always remember: Your truth is yours alone.  It is what you believe, not necessarily what is actual fact.  It takes an open mind to look within oneself and see that what you think is nonbiased.  When I find that many others see matters just as I do, I can then say I don't stand alone in my own opinion.
Posted by Caddie at 4:31:00 PM No comments:

"The ultimate weakness of violence is that it is a descending spiral, begetting the very thing it seeks to destroy. Instead of diminishing evil, it multiplies it. Through violence you may murder the liar, but you cannot murder the lie, nor establish the truth. Through violence you murder the hater, but you do not murder hate. In fact, violence merely increases hate. Darkness cannot drive out darkness; only light can do that. Hate cannot drive out hate; only love can do that"
Posted by Caddie at 12:32:00 PM No comments:

" Mueller had begged him to let her tag along so she could see the suffering firsthand and help, despite the dangers of traveling into the war-torn region. "

Those words are contained in a news story I read on Yahoo today.

Will the turmoil of our world ever end?

One can hope.  Having hope is that which keeps us striving.

Man Is A Benevolent Being? *

I think not!  See  what we have done.  It's safe, go ahead and click on the link.  the video is off YouTube, an animation of about 3.5 minutes.  Sure, you can spare the time.http://www.nextworldtv.com/videos/interesting--other/man

I am so tired of living in a world of horror.

Almost four years ago I wrote the same words.  Nothing has changed. It is the same today as it has continued to be; "for how long", you may ask.  Well, as long as I've been around, almost 'four score long'.

My conscience, my soul can never justify the look in these children's eyes, the set of the mouth.  Never.  We should remember, karma is a given.

that can be remembered for a lifetime.  They often outlast the speaker,

"The Danger Of Words"

by Paulo Coelho
"A woman said so often that her neighbor was a thief that the young man was finally arrested. Some days later, they discovered that he was innocent and set him free. Then he sued the woman.
“Comments are not so serious,” she said to the judge. “Granted,” answered the magistrate. “When you get back home today, write down everything bad you said about the young man, then tear up the paper and throw the bits away as you walk along. Come back tomorrow to hear the sentence.”
you are pardoned if you give me the bits of paper you spread on the street yesterday. Otherwise you will be condemned to a year in prison,” declared the magistrate. 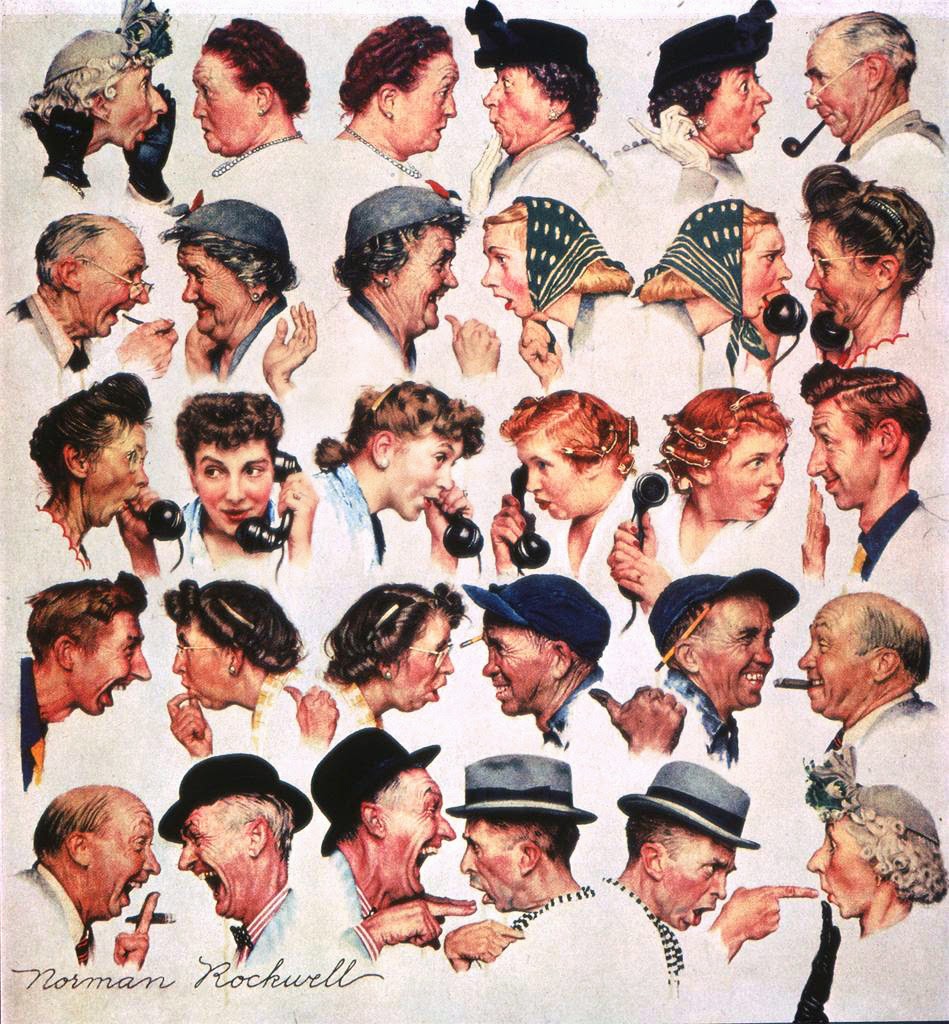 This reminds me of the time my grandmother told me the story of the woman who opened her window, shook her pillow in the air.  A flaw in its cover caused the feathers to come out and blow all about.  She couldn't retrieve them.  Grandma's story was a lesson about gossiping impossible to un-speak, retract.  I have sometimes forgotten her telling me this story as we walked along on that pleasant day.  I was only four years old but well understood what she was telling me. The story illustrates  a lesson for us all to learn.

Character is who we are.  Reputation is what others think and say about us.  So often words are said without thought of what harm it may cause another human.  So often our thoughts and words can cause long lasting pain for others, pain that can last a lifetime, sometimes even into next generations.  So the next time, you or I have something to impart, whether it be truth or not, let us stop and THINK; is it necessary or correct to be speaking of this in such manner?

Something else I find unnecessary and very distasteful: I've visited Bloggers, who are often blasting other people; their lives, looks, how they spend money, their walk, their "outrageous attire", how  they keep house, smell! etc., on and on, ad nauseam.  Blazed & charred profanity erupts without warning.  Another character is always in dire straits: we are all in need sometimes BUT not continuously! Readers are expected to comment pleasantly and to agree and accept their views; else they will "take you down at the pass".  Seeing all the bitching/cursing/ranting about others tends to color my world a dark shade of gray.  Living in solitude has expanded my attention toward others' viewpoints.  Good sensible words and views I enjoy reading. Others I have the prerogative to reject my attention. So hopefully we can keep in mind the stories of the "Feather Pillow" and the "Judge's Decision", and recall that we each and every one have the privilege of living our life, whatever fashion it may be.
(Excuse me now.  It being balmy outside, I must go clean up the clutter in my yard; I see the Lawn Police cruising the lane! Ha Ha)
Pictures are taken from the internet.
Posted by Caddie at 2:54:00 PM No comments:

The Produce Without The Poison: How to Avoid Pesticides *

This came in my email today. Valuable information.   I thought I was keeping fairly safe, yet this information shows I can do better, much better.  You too can become more cautious and alert.  Many thanks, Sender.