Pilfered this from another.


Buddhists teach something like this... You never know what holy being that is looking in your door giving you a chance to be kind.

What I Have Learned Today - Maybe What You Haven't *

(note: chime back on this. Your opinion is valuable)

March 29, 2015
US Laser Test That Destroyed Germanwings, Next Plunges Holland Into Darkness
By: Sorcha Faal, and as reported to her Western Subscribers
A new Ministry of Defense (MoD) report circulating in the Kremlin today claims that the failed 24 March US Air Force test of its High Energy Liquid Laser Area Defense System (HELLADS) that was attempting to shoot down a simulated Federation nuclear warhead, which resulted in the downing of Germanwings Flight 9525 killing all 150 aboard, was attempted again on Friday, 27 March, but this time resulted in the catastrophic shutdown of the electrical grid in Northern Holland, including Amsterdam.

According to this report, Friday’s HELLADS test that blacked out Northern Holland was the third of its kind performed by NATO over the past nearly 24 months, the other two having the consequence of (1.) the near catastrophic crash of Lufthansa Flight LH1172 over France in May, 2013, and (2.) the obliteration of Germanwings Flight 9525 on 24 March, again over France.
In the May, 2013, near disaster of Lufthansa Flight LH1172, this report continues, pre-HELLADS testing by NATO in preparation for the 22 May 2013 launching of an ICBM from Vandenberg Air Force Base in California was determined by the MoD to be the cause of this near catastrophic incident where this airliner suddenly plunged towards the ground.
Likewise, this report says, the 23 March ICBM launching for the following days HELLADS test that destroyed Germanwings Flight 9525 was then followed by Friday’s (27 March) ICBM launching that crippled Northern Holland.
To exactly how these ICBM-HELLADS tests are conducted, this report explains, a LGM-30G Minuteman-III ICBM is fired to an altitude of 1,120 kilometers (700 miles) at a speed of nearly Mach 24 (approximately 15,000 mph) after which it deploys an Advanced Maneuverable Reentry Vehicle (AMaRV) into Polar orbit and the body of the craft falls into the Pacific Ocean.
The AMaRV, which simulates multiple nuclear warheads, MoD experts in this report say, is then fired upon by the high-energy lasers of the HELLADS in an effort to destroy them as they attempt reentry towards their target(s).
The “critical failure” of the HELLADS, however, this report says, has been their use upon the B-1 bomber platform, as was done in all of these tests, which aside from having to be continually tested in the days/weeks leading up to these tests, is notorious for its continued aiming failures.

To why NATO conducted their Friday HELLADS test just 3 days after they downed Germanwings Flight 9525, this report says, was in retaliation for the Federations successful test-firing of an RS-26 Rubezh ballistic missile on Thursday.
And as to why the Western people aren’t being told the truth about NATO’s HELLADS being the cause of the Germanwings Flight 9525 shootdown, the Foreign Intelligence Service (SVR) had previously reported on detailing the massive cover-up operation now being implemented by Western intelligence agencies accusing this airliners co-pilot as being responsible for this disaster.
However, this MoD report points out, the recovered audio from Germanwings Flight 9525 clearly shows the opposite of what the Western propaganda media have been reporting in that the “screams of passengers” are heard first, then they go silent and the noise that follows is of “crunching metal”, cockpit alarms, and indecipherable radio chatter before all goes silent…all indications, experts in this report point out, that this airliner suffered a catastrophic failure killing all passengers and crews first, after which the airliner exploding in air…and as the debris field proves it did.

As has been proven in other such disasters as Germanwings Flight 9525, this report concludes, there is no likelihood of the Western governments ever telling their people the truth about what happened as evidenced by their continued cover-up of the Malaysia Airlines aircraft shot down by a Ukrainian fighter last year…and which Foreign Minister Sergei Lavrov warned again on 19 March that the Western media have ignored officially documented information from eyewitnesses, previously obtained by Russian media and investigators, including those indicating the presence of a Ukrainian military jet in the vicinity of the doomed flight, and still to this date the American CIA is still refusing to release their data proving this is true.


[Ed. Note: Western governments and their intelligence servits actively campaign against the information found in these reports so as not to alarm their citizens about the many catastrophic Earth changes and events to come, a stance that the Sisters of Sorcha Faal strongly disagrees with in believing that it is every human beings right to know the truth.  Due to our missions conflicts with that of those governments, the responses of their ‘agents’ against us has been a longstanding misinformation/misdirection campaign designed to discredit and which is addressed in the report
http://www.whatdoesitmean.com

The Elderly Deserve Our Respect *


and our greatest care and attendance.  Life is a long and weary journey.  Growing old and feeble requires that we receive care and attention from younger healthy ones.  If you are fortunate to live a long life, you too, in turn, will require help and care with daily needs.  I urge you to keep in mind that you and I - we all grow old and fragile - become debilitated and need help. 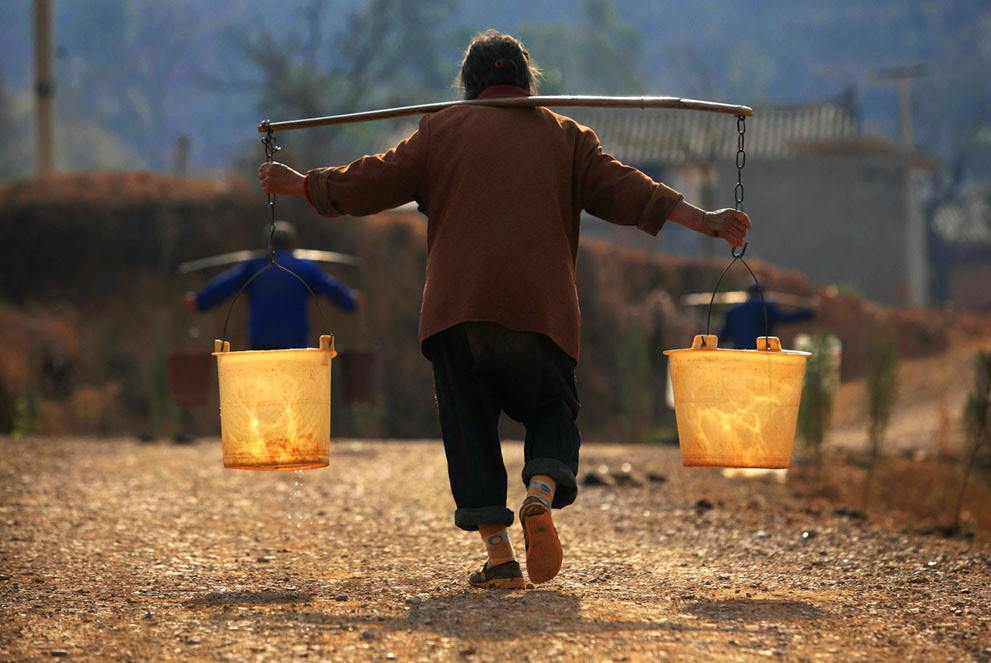 "A legend tells of a man who used to carry water every day to his village, using two large pitchers tied on either end of a piece of wood, which he placed across his shoulders. One of the pitchers was older than the other and was full of small cracks; every time the man came back along the path to his house, half of the water was lost.

For two years, the man made the same journey. The younger pitcher was always very proud of the way it did its work and was sure that it was up to the task for which it had been created, while the other pitcher was mortally ashamed that it could carry out only half its task, even though it knew that the cracks were the result of long years of work.

So ashamed was the old pitcher that, one day, while the man was preparing to fill it up with water from the well, it decided to speak to him. "I wish to apologize because, due to my age, you only manage to take home half the water you fill me with, and thus quench only half the thirst awaiting you in your house."


The man smiled and said: "When we go back, be sure to take a careful look at the path."

The pitcher did as the man asked and noticed many flowers and plants growing along one side of the path. "Do you see how much more beautiful nature is on your side of the road?" the man remarked. "I knew you had cracks, but I decided to take advantage of them. I sowed vegetables and flowers there, and you always watered them. I've picked dozens of roses to decorate my house, and my children have had lettuce, cabbage and onions to eat. If you were not the way you are, I could never have done this. We all, at some point, grow old and acquire other qualities, and these can always be turned to good advantage."
- http://paulocoelhoblog.com/
Posted by Caddie at 10:25:00 AM No comments:

Even the Butterflies Have an Impact Updated March 23rd * 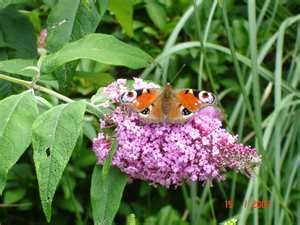 note: I am not certain this is one of my pictures.  On considering it again, I don't recall seeing this butterfly here.  My apology if I have used your butterfly pic w/o your permission.  I do have one bush covered in two other types.
Posted by Caddie at 6:28:00 AM No comments:

Spring Has Sprung! Be Happy! * 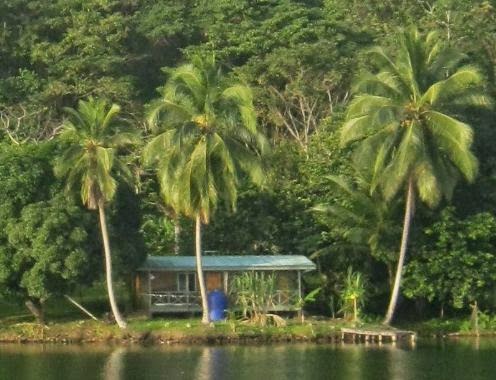 The deep serenity down here in the Archipelago of Bliss soothes and inspires me.   Sometimes AVENTURA and I find a tiny lagoon that is so tranquil that the silence almost seems to speak.  In many spots the Jungle runs all the way down to the Sea.  Such symbolism comforts me, because they are both such essential incubators of Life.
Last week I found a bay so sublime that the voice of Nature was louder than the clamor of Humanity.  On a typical day I would see 25 dug-out cayucos being quietly rowed by extremely fit Indios.  Only rarely was the stillness disturbed by a boat with an engine.  Most of the human sounds came from happy children - laughing and playing in the shallow water.
A little cabin on the shore caught my eye.  It seemed like a perfect hideaway for a writer, and I imagined Thoreau sitting on its tiny porch in the twilight savoring a day well-spent on reflecting and writing.  I believe that if he lived today he would choose a sailing boat as his platform for observing and commenting on Life.  A cabin on Walden Pond would be impossibly expensive; and he would chafe at the preposterous restrictions that the bureaucrats would demand.
I have long felt that he too would choose the Sea Gypsy Philosopher life.  This intuition was recently reinforced for me when I learned that the final sentence that he uttered on his deathbed was, “Now comes good sailing!”  These thoughts led to a deeper meditation on how astonishingly different the world is now - in just the 153 years since his death.

" only reflect human greed and madness."

excerpt taken from WhatDoeItMean.com *
Posted by Caddie at 8:47:00 AM No comments: 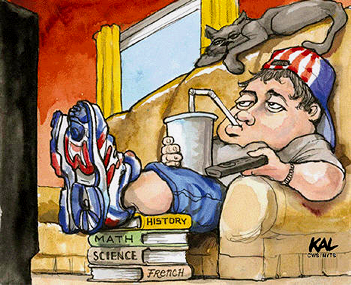 "He who passively accepts evil is as much involved in it as
he who helps to perpetrate it.
He who accepts evil without protesting against it is really
cooperating with it."
- Martin Luther King, Jr.
Posted by CoyotePrime
Posted by Caddie at 8:14:00 AM No comments: