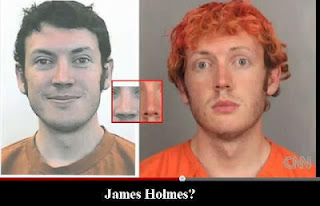 Is this one and the same person? Ignore the hair.  Compare the other features. the nose?
Posted by Caddie at 11:10:00 PM No comments:

holycow! Google "Barclay's", and Libor !  You could have knocked me over with a feather; is 'zillion' a word?  I think so; my son used it at age four.

About Barclays, uh huh!  Who Else is emBedded with Barclay's?  You can well imagine the whole long list of cohorts - uh Bedmates.﻿
﻿﻿﻿﻿﻿﻿
I love to see crime exposed!  Especially that of financial crooks!


Some folks didn't like BoA's decision.  BoA backed down. 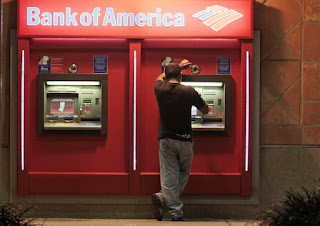 This photo taken Oct. 14, 2011, shows a customer at a Bank of America ATM in Hialeah, Fla. Bank of America Corp. is scrapping its plans to charge a $5 monthly debit card fee. The bank's decision to drop the fee came after a roar of customer outrage in recent weeks over the fee. (AP Photo/Alan Diaz)


and this (make 'em big,  doc!) I just found http://www.huffingtonpost.com/2012/07/17/rachael-claire-martin-barclays-money-plastic-surgery_n_1680112.html while searching for a picture of a Barclay Bank﻿﻿﻿﻿﻿﻿﻿﻿﻿
﻿﻿
A beautiful building, isn't it? I like the balconies and at the top appears to be a crown; possibly is - a bejeweled crown. 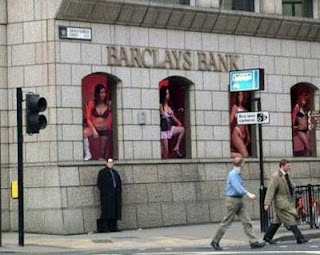 Surely this is a Photoshop creation. Isn't it? Yikes

The Libor gets its name from the City of London

Do you know about Libor? It affects us all.

What I learned from http://www.wikipedia.com/


The Libor gets its name from the City of London, one of the largest financial centers in the world.The London Interbank Offered Rate is the average interest rate estimated by leading banks in London that they would be charged if borrowing from other banks.[1] It is usually abbreviated to Libor ( /ˈlaɪbɔr/) or LIBOR, or more officially to BBA Libor (for British Bankers' Association Libor) or the trademark bbalibor. It is the primary benchmark, along with the Euribor, for short term interest rates around the world.[2][3]

Libor rates are calculated for ten different currencies and 15 borrowing periods ranging from overnight to one year and are published daily at 11:30 am (London time) by Thomson Reuters.[4][5] Many financial institutions, mortgage lenders and credit card agencies set their own rates relative to it. At least $350 trillion in derivatives and other financial products are tied to the Libor.[6]

In June of 2012, multiple criminal settlements by Barclays Bank revealed significant fraud and collusion by member banks connected to the rate submissions, leading to the Libor scandal.[7][8][9]

and then I learn how a "certain" county in Florida has dumped 100's of pallets of bottled water - it was 'Out of Date'!

Then there is FEMA down there because of the recent flooding.  Ha!  I don't trust the PTB.

When will all the pure bs quit?  Only when we each and all stand up and say: "Enough already!"
This appears to be what is gradually happening; high dollar crooks are being exposed left and right.
Posted by Caddie at 1:57:00 PM No comments:

Happy Men in the Making ***

Percussive guitarists.  Downright great talent.  All sound you will hear is coming from a guitar.  I thought there was other background instruments but no.

"Politicians are the same all over. They promise to build a bridge even where there is no river"
Nikita Khrushchev (1894 - 1971)

"Ignorance is never out of style. It was in fashion yesterday, it is the rage today and it will set the pace tomorrow"

"Blessed is he who talks in circles, for he shall become a big wheel"

A headline in the news today told me our incumbent leader is heading out on his campaign trail.  What about the expectation that a president should actually spend his four years focusing on and caring for the country and it's citizens - 100%.  Should we expect any less?  I certainly don't think so.

Every which way you look there is one and another out beating his drum, cajoling the citizens to jump on his personal bandwagon; promising us the moon, everything under the sun and even a whopping helping after sundown.  BH!  I am so tired of nonsense and  pure 'out and out' lies.

For many months of the past year my eyes were assaulted by signs packed by the local roadsides proclaiming  "The Best is Yet to Come if you vote for me" on election day.  Even after the votes were all in , winners all announced with fanfare, those cluttering signs often remained for weeks longer.  Maybe in hope that their name would be remembered next go-round?  Probably.

Then there is today; just how long have we had to contend with political BS since the last election?  Frankly, I'm worn out being assaulted constantly with politicians and their agendas, while the citizens are mired in the puddles; fed up being fed the antics of the bankers, corporations, CEOs shenanigans, and the Baloney of Bollywood - um uh, Hollywood.
__________________

Now it becomes more clear why I don't watch a television; yet the slick shysters have  taken over the airways of internet.   I have a feeling if this path of communication should fail, the Schools of Ventriloquism may get a rush of students, who in time learn to pitch their spiel via the birds or even clouds; heaven forbid if they learn how to throw their voices via any thunderboomers.
__________________
As it has taken long hours typing this  short post, I now remember why I've been mostly silent.  IE + Blogger has become a battleground and an exercise in futility for me.  Excuse me now.  I'm off to weed and dig a bit; to see if the earthworms and sallybugs may have some more intelligent views to impart.  I bet they will.
Posted by Caddie at 8:23:00 AM No comments: